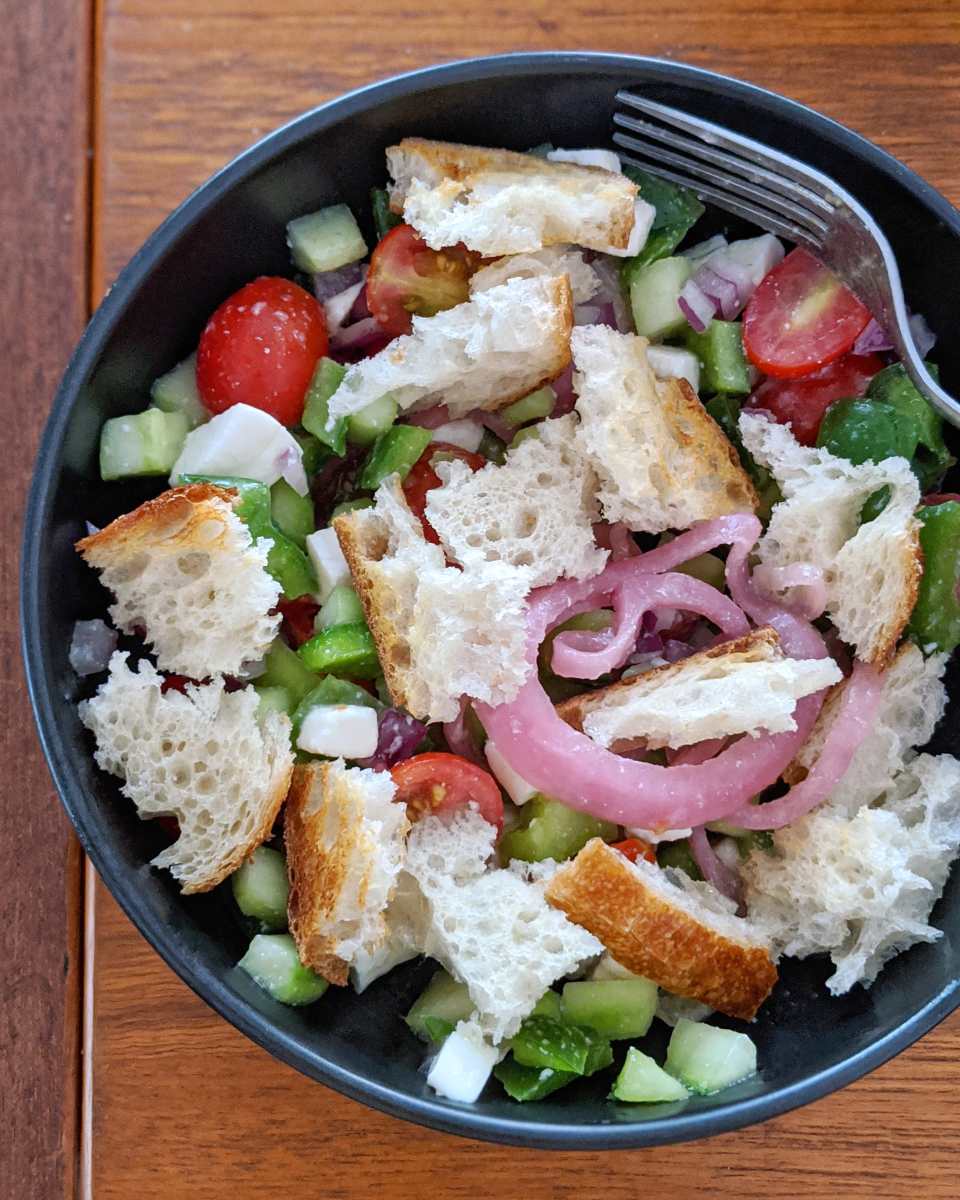 Panzanella has become one of my go-to summer meals over the past few years. It’s incredibly easy to whip up on a hot night, and I often make it in batches so I can have a bowl for lunch on my busier work days.

As COVID-19 cases have started to decrease – errrr, for now – in NYC, I am happy that, for the first time since the end of March, it’s safer for me to go on small grocery store runs. (It’s the little things. 🙏) My cart is almost always filled with those quintessential panzanella ingredients: cucumbers, tomatoes, red onion, a bell pepper, and fresh mozzarella. (Also included? Some obscenely overpriced iced tea and a box of Frosted Flakes. It’s all about balance.)

Do you want to know a good time-saving hack? Toast two slices of good bread – I love to use sourdough – in the toaster for 4 minutes, cool slightly, then rip up to use as your croutons! That’s my ace in the hole. Summer is for being lazy, I am not about to fire up my oven to make croutons. Get outta here. 😏

(How many servings is this? You’re asking the wrong person, I could eat half of this at once.)

1.) Make the pickled red onions prior to starting the panzanella. After slicing or using a mandolin to cut the onions, set aside in a 16 ounce glass jar or container along with the scored garlic cloves. (There may be more, depending on if the onion veers closer to medium-large than medium-small.) Heat vinegar, water, sugar, and sea salt over low heat just until the sugar and salt dissolve. Remove from heat, cool for five minutes, then pour over onions and garlic. Seal and allow to sit for at least one hour, but up to overnight; pickled onions should last about 3 weeks refrigerated.

2.) For the panzanella, prepare all vegetables and mozzarella as listed in the ingredients section. Add to large bowl, and thoroughly toss with olive oil, brining liquid or vinegar. Allow to sit for 10 minutes.

5.) If saving leftover panzanella or making a batch of it for meal prep, do not mix in bread or pickled onions. Add as a topping when ready to serve.